Magore’s Fiends are the second Khornate warband released for Shadespire. Unlike Garrek’s Reavers, the Fiends focus on heavily-armoured assault. The box contains three Blood Warriors and a daemonic Flesh Hound. This is a review of the expansion contents.

The format for Shadespire warband expansions is now pretty familiar. There’s a new group of models, complete with detailed bases. There’s also a stack of new Objective and Power cards. These help to build thematic decks for the Fiends, and also bring new tactics that other warbands can use. 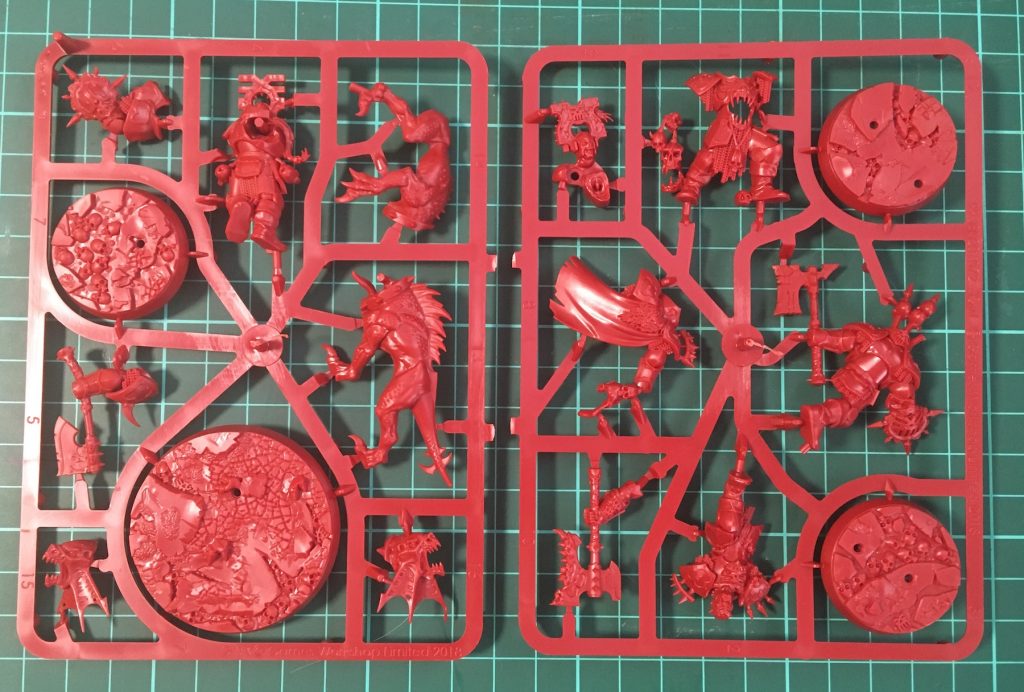 No surprises here – the detail and casting is flawless. One of these days, we might finally see a plastic Flesh Hound unit from GW… in the meantime we’ll have to make do with Riptooth and the hound from Korgos Khul. The Flesh Hound is suitably huge, and the Blood Warriors have some great dynamic poses.

I often convert my models, but hadn’t felt a need to with any other Shadespire releases so far. Magore’s Fiends are fantastic straight from the box, but I decided to make some small changes. Magore became more daemonic to show the results of a long campaign for the Blood God – gaining a daemon head and a tongue for his belly maw. His helmet went to Ghartok the Flayed, so both minions have skull helms. That meant I needed a better way to identify which minion had the big knockback weapon (Kharkus). He ended up with a four-axe axe from the Bloodsecrator model. That left the warriors looking like this:

The whole warband can be inspired quite easily – they have accurate attacks, and just need one to land. Magore comes with Cleave; Ghartok can’t be driven back, and Zharkus can knock back his foes. Riptooth seems nasty. 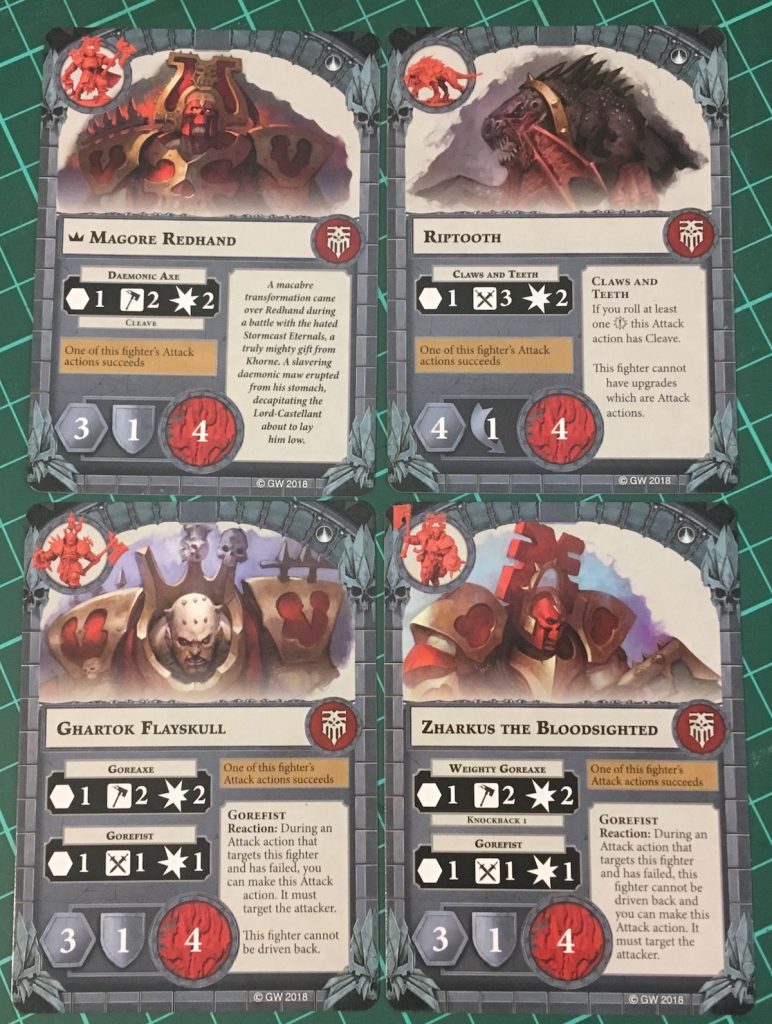 Once they’re inspired, things change: the warband speeds up a bit, Magore deals more damage, and the minions get more accurate attacks. Interesting to see accuracy and not damage getting increased. It means that fights get bloodier, but you won’t see them one-shotting their enemies – so those 4 wounds  per model will be vital. 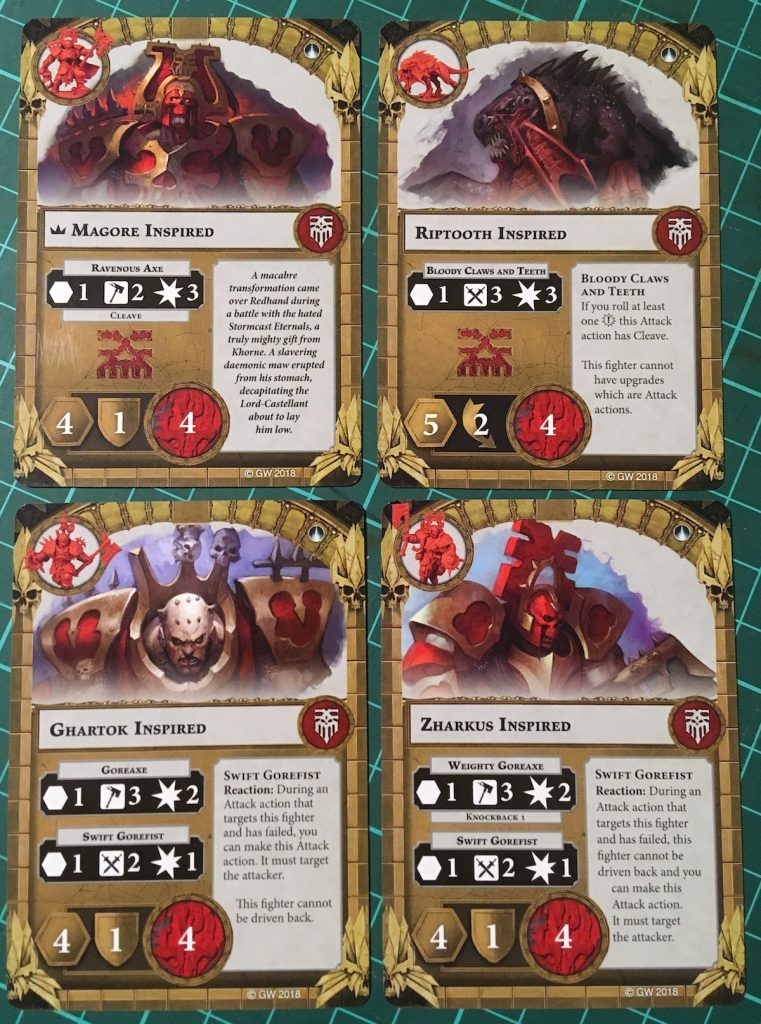 I love the warband-specific cards that each expansion comes with. These really help to define the character of each warband, often providing a couple of distinct playstyles for each group. The Blood Warrior upgrades are all-out assault: more damage, more glory from kills, some charge bonuses and Magore’s Daemonic Maw (it heals him!). Riptooth gets the utility upgrades: Predatory Leap lets it charge through models, and Shake About repositions its targets.

The ploys are more balanced: Bloodslick Ground is a nice global movement penalty, helping swing the momentum in your favour for a charge. Fountain of Gore is a nice defence bonus, helping the warriors to trigger more of their Gorefist attacks. Horrifying Howl is a two-space push, and Furious Inspiration is there for when you absolutely must be inspired before your first attack.

These tend to fall into a few categories. Some achieve basic mechanical effects: making a model a bit faster or stronger. Others give more choice in how you score from objectives. Then, there are cards that build on the Shadespire city itself: glass artefacts and supernatural properties of the City of Mirrors. There aren’t many of the former – I think that territory has been picked over by the previous six warbands. That’s good, as it leaves plenty of room for novel mechanics.

There are some great Shadespire generics: Tethered Spirit is a respawn upgrade (ignore a fatal blow and reposition) effect; Hidden Paths lets you outflank, Invisible Walls is another one-activation global speed penalty, Flickering Stride could teleport you a long way if you roll well. Mischievous Spirits is a standout ploy for helping (or crippling) objective-based play, letting players take it in turns to move every single objective one space.

Tainted Vitality removes a wound from each wounded fighter in play – helping to keep everyone fighting and bleeding for longer. Khorne must be proud.

That’s all I have for now. It’s time to get some paint on these figures, and then maybe (?) try out a game with them before I take them to a local tournament next month. Wishful thinking… I know I’m almost certainly going to try them out for the first time during the event 🙂

I’ve also updated my Shadespire Card List to cover all the new toys from the Magore’s Fiends expansion, so you can see just how many Offence cards are in that Power deck. Stay tuned for some painting updates! 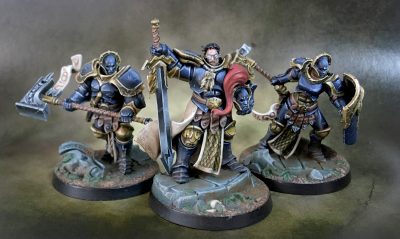 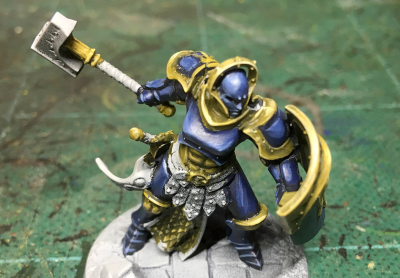