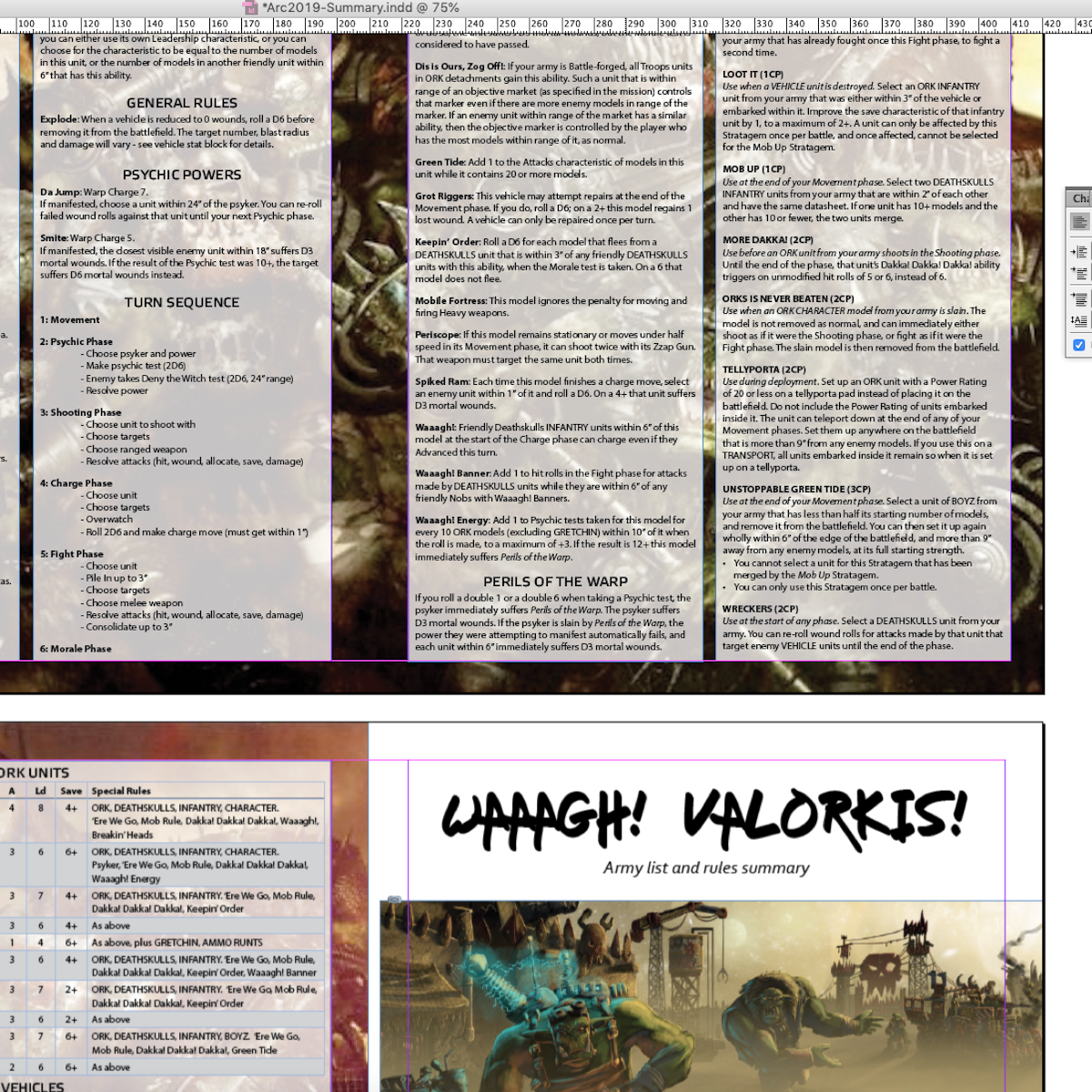 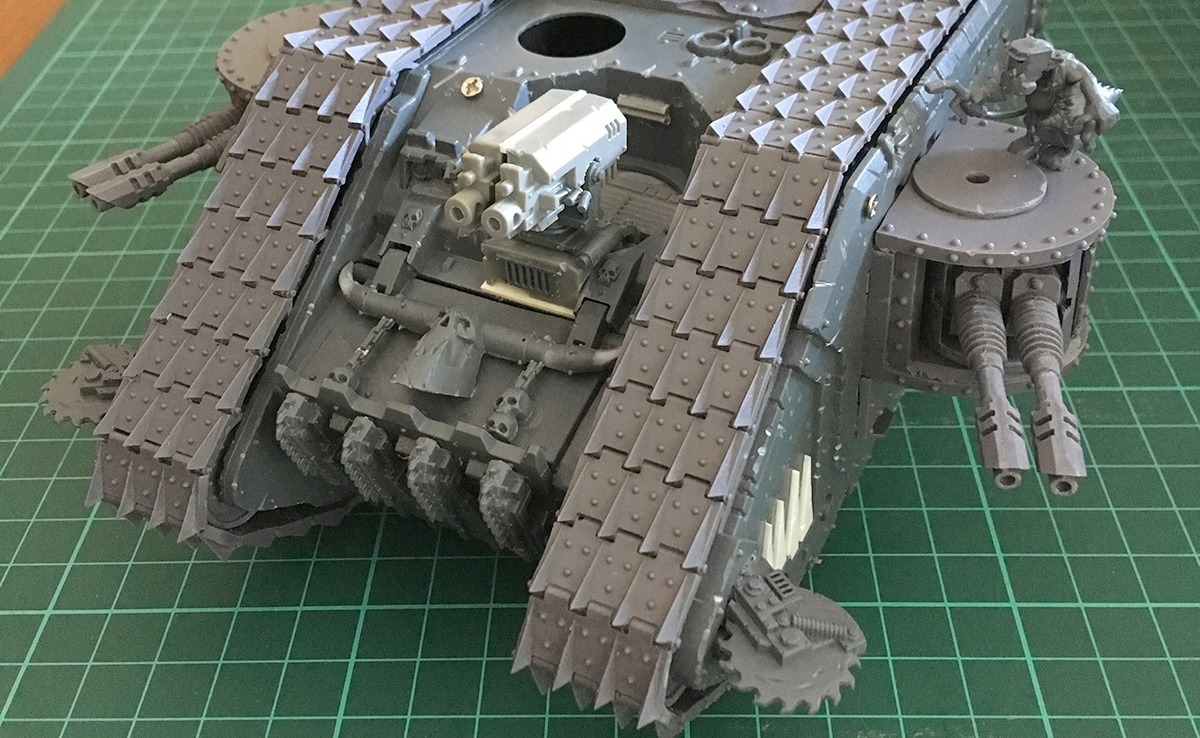 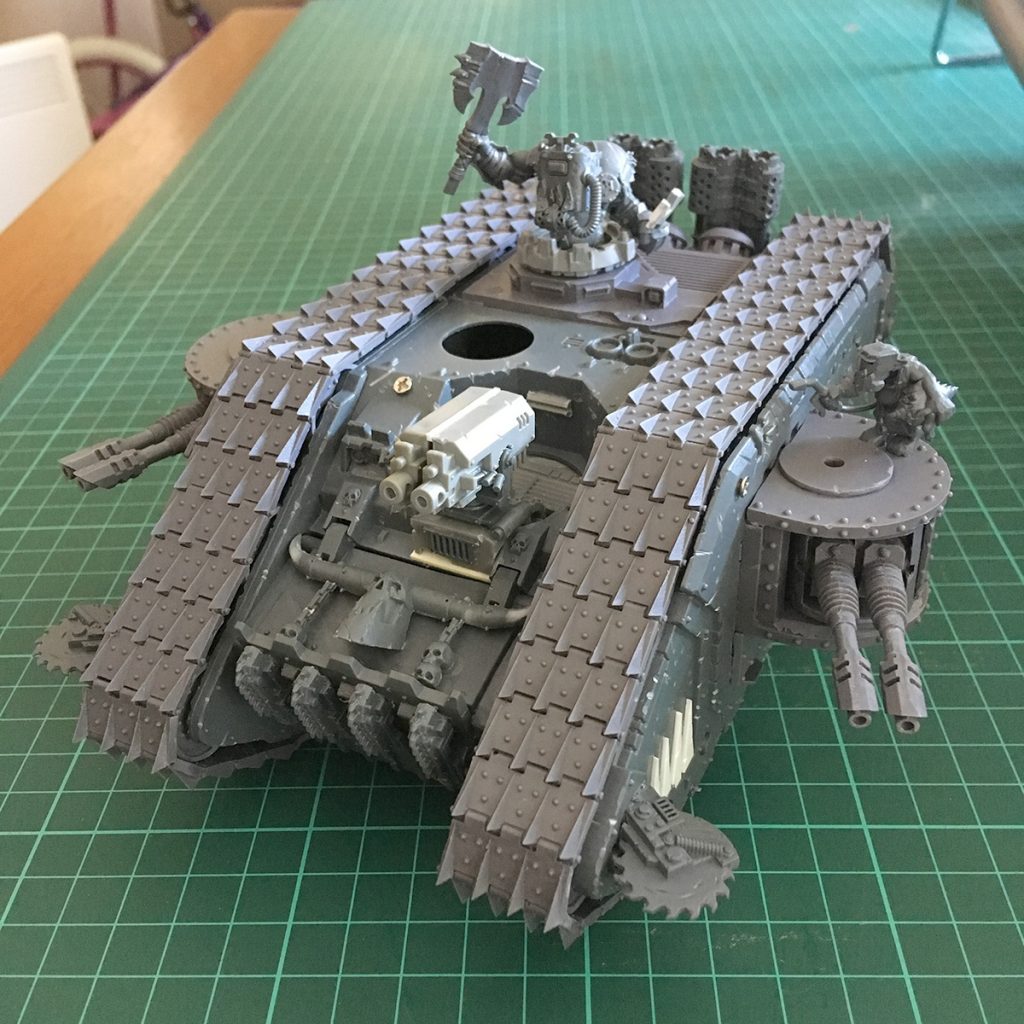 I have lots of assembly pics, so I’ll add them after the cut…

Blood and Skulls Industry produce excellent resin conversion parts, which I’ve used previously on my Imperial Guard. Today a package arrived with most of the parts needed to build the final two models for my Ork Custodes project. For the Venerable Land Raider, there’s a Sagittarius track conversion kit (with a set of spiky “Oppressor” tracks), some Alpha-pattern dual weapon sponsons, and four light Laser Cannons. There are also some small jet fans which I’ll use on a jetbike conversion.

I’m excited about getting the tank fully assembled. The Ork Land Raider will be a huge centrepiece model for the army. Also, weighing in at a hefty 400 points it’s almost a third of my army points for Arc40k. It’s also a great opportunity to try using up as many of my remaining Ork model parts as possible. I’ve started with the mekboy welding mask, on an ‘Ardboy crewman doing his best “Drive me closer, I want to hit them with my axe” pose. 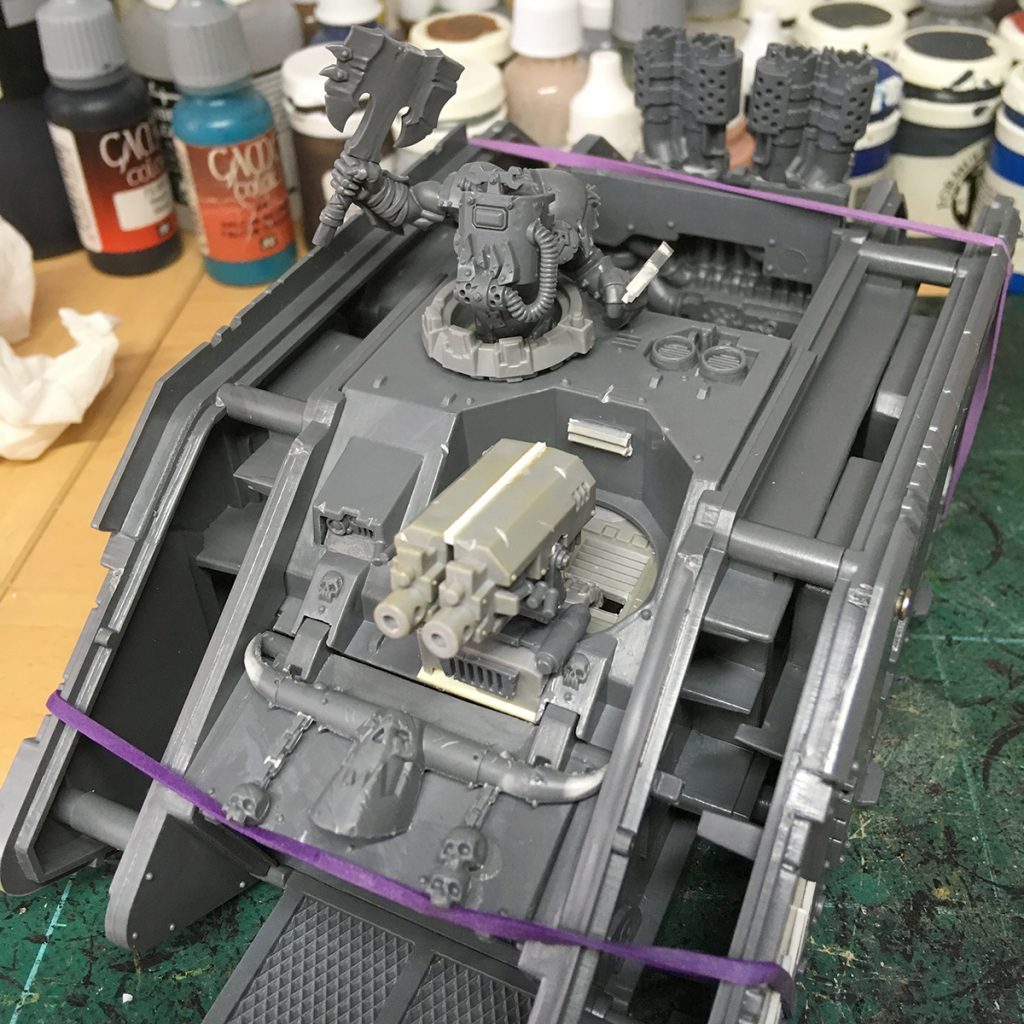 Here’s what the Blood and Skulls Industry gear looks like straight out of the box: 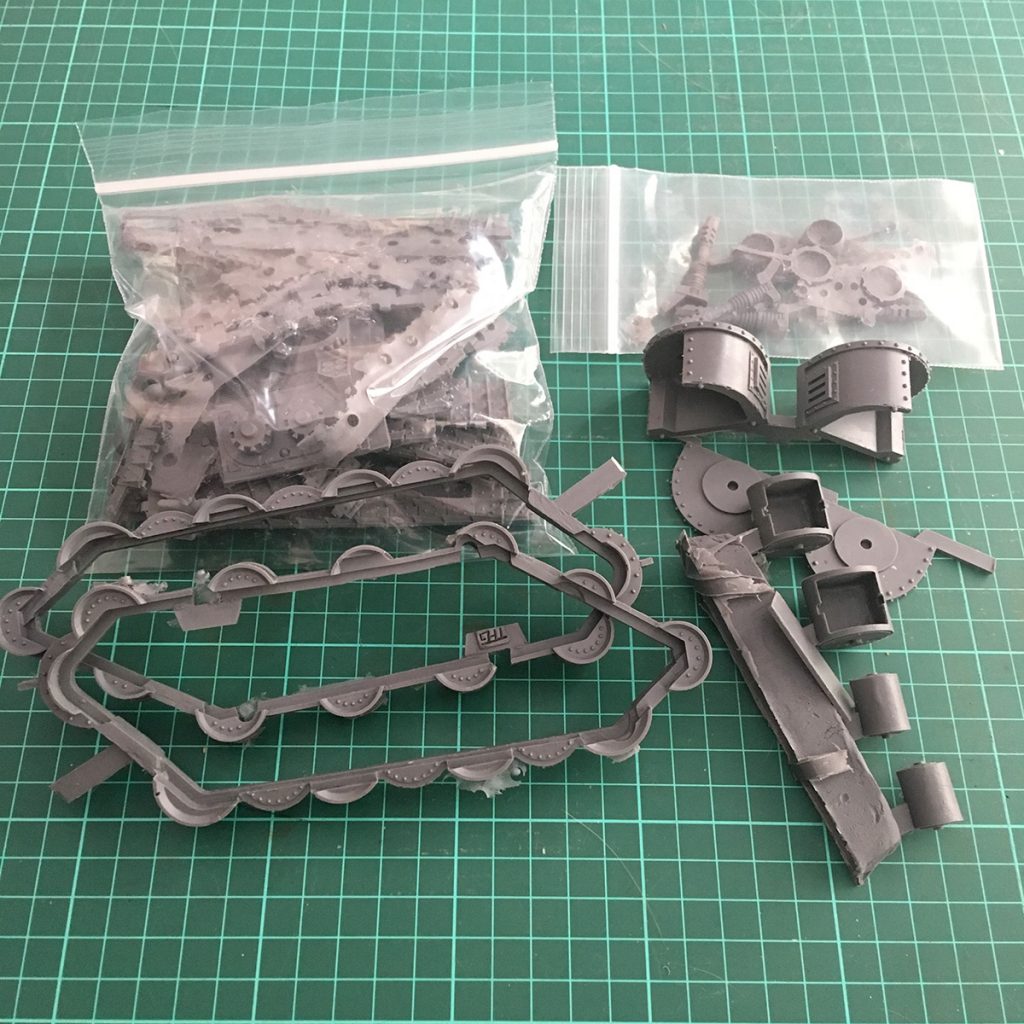 Quite a lot of flash on the track links, but the detail is beautiful. Very clean castings, no air bubbles, and it seems a bit tougher than Forgeworld’s resin. It does all feel quite greasy to touch, though. I anticipate having to wash off a lot of mould release before assembly can begin on these. 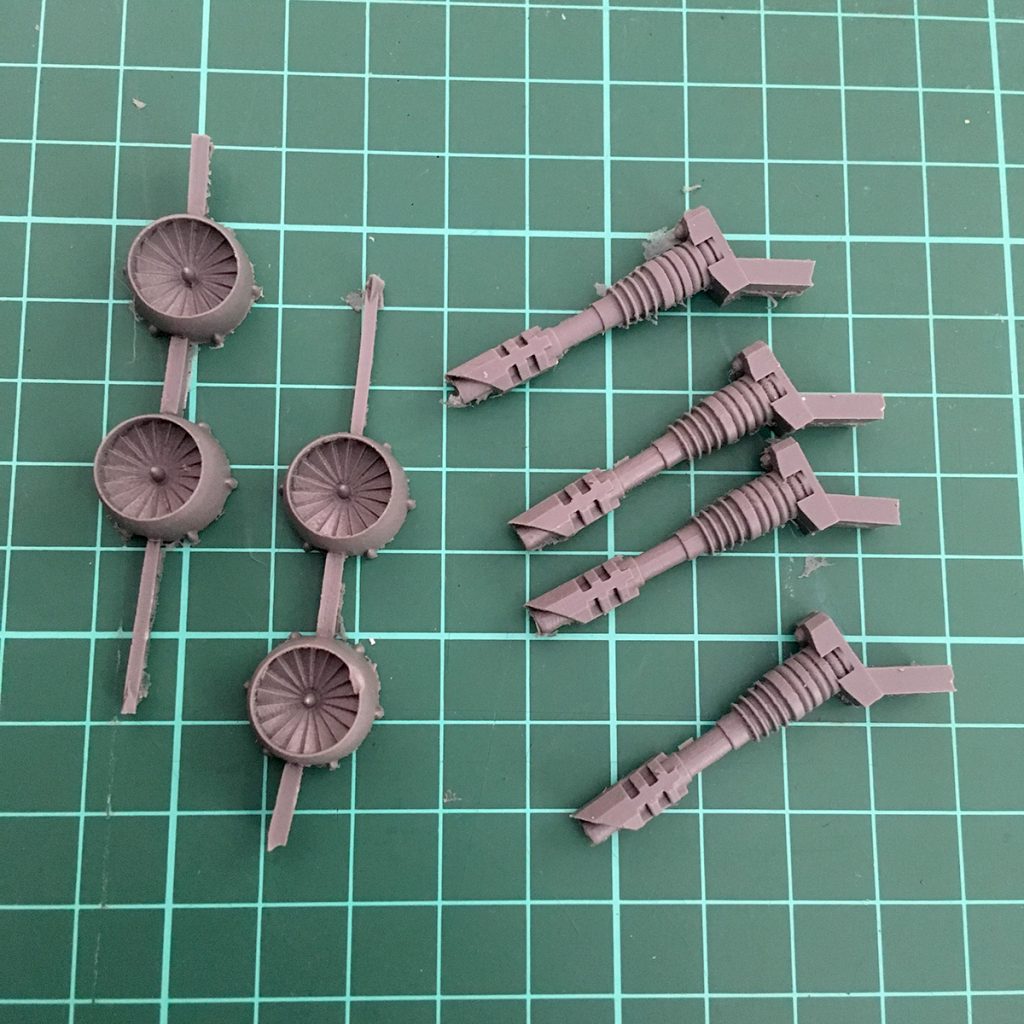 I like the slightly chunkier lines of the Blood and Skulls Industry weapons. The profile is still instantly recognisable to anyone familiar with Warhammer 40,000, but there’s a unique, slightly cruder aspect to the proportions. 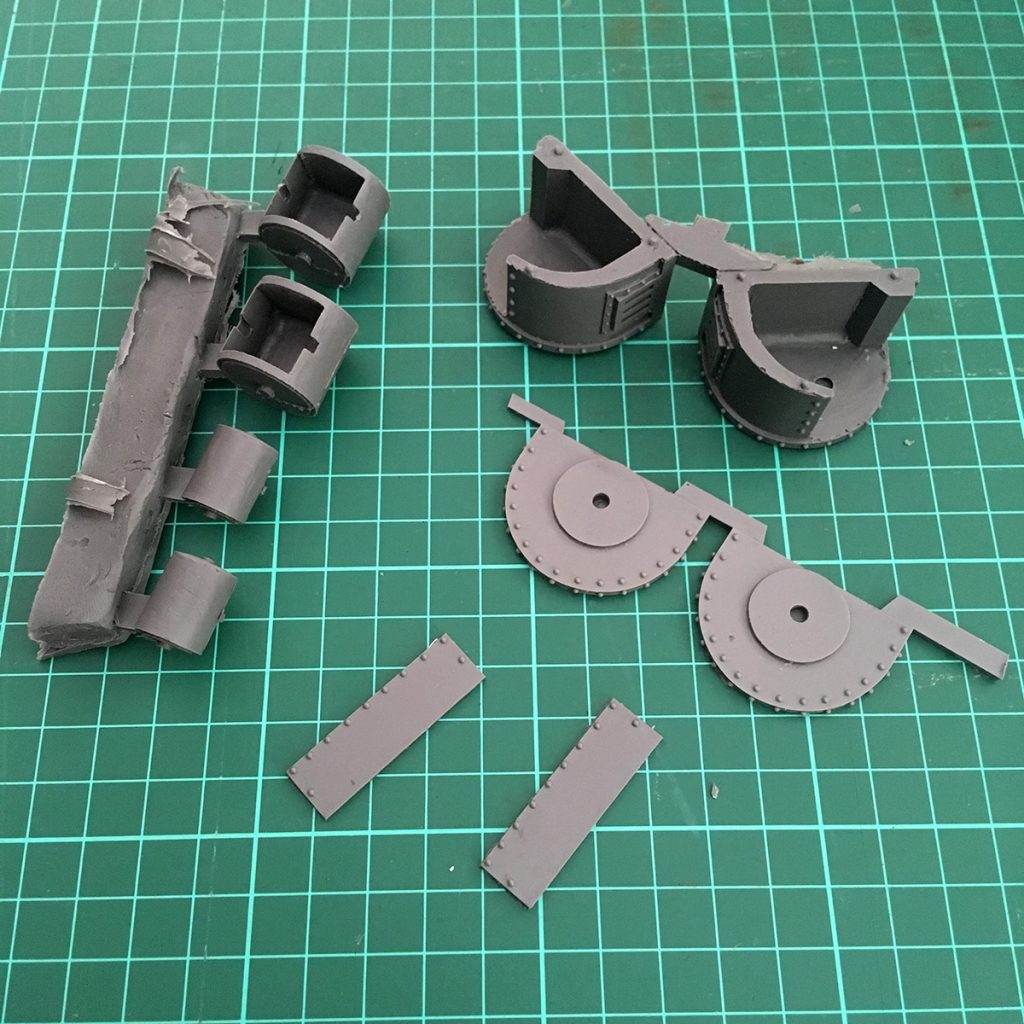 Not shown here: the handy magnet-sized holes in the back of the sponson weapon mounts. These match the holes in each of the weapons. The Blood and Skulls kits are great on tanks like the Leman Russ, where you can easily magnetise a few different weapon options. In this case, I’ll glue them in place: a Custodes Land Raider always carries two twin-linked lascannon.

Next time, I’ll cover how those enormous tracks are actually assembled. Then, I’ll try to finish off the Land Raider assembly before turning my attention towards the Shield-Captain’s jetbike. 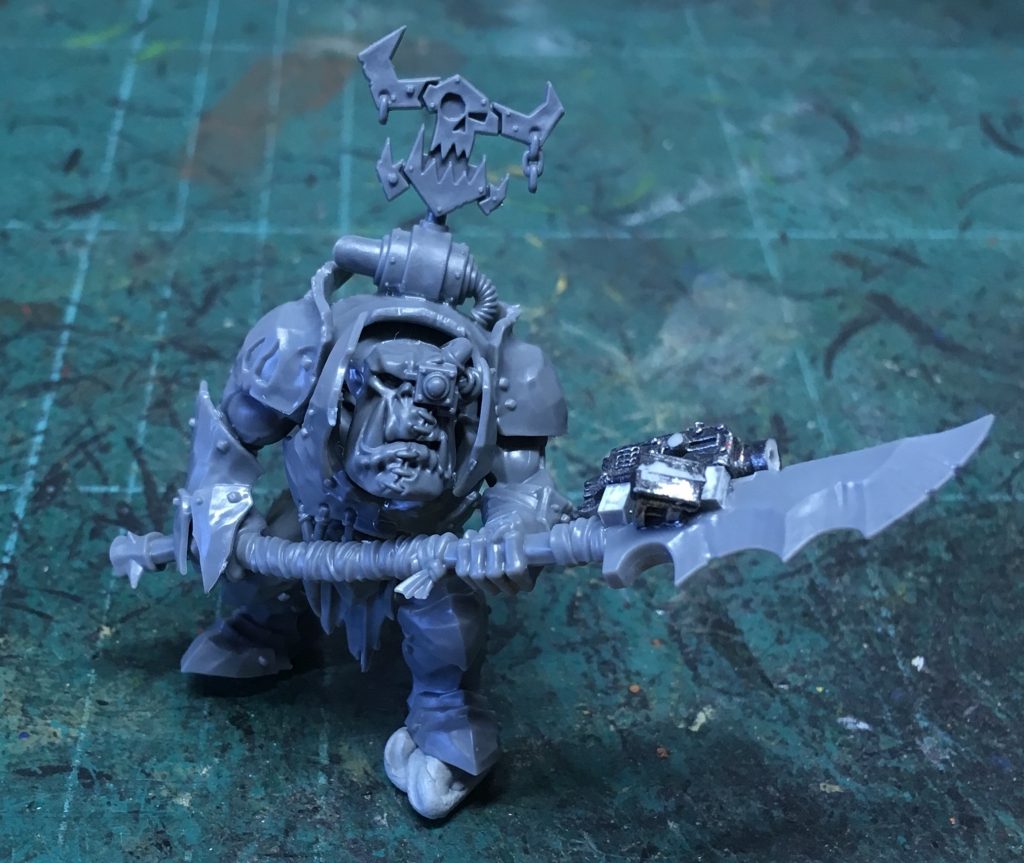 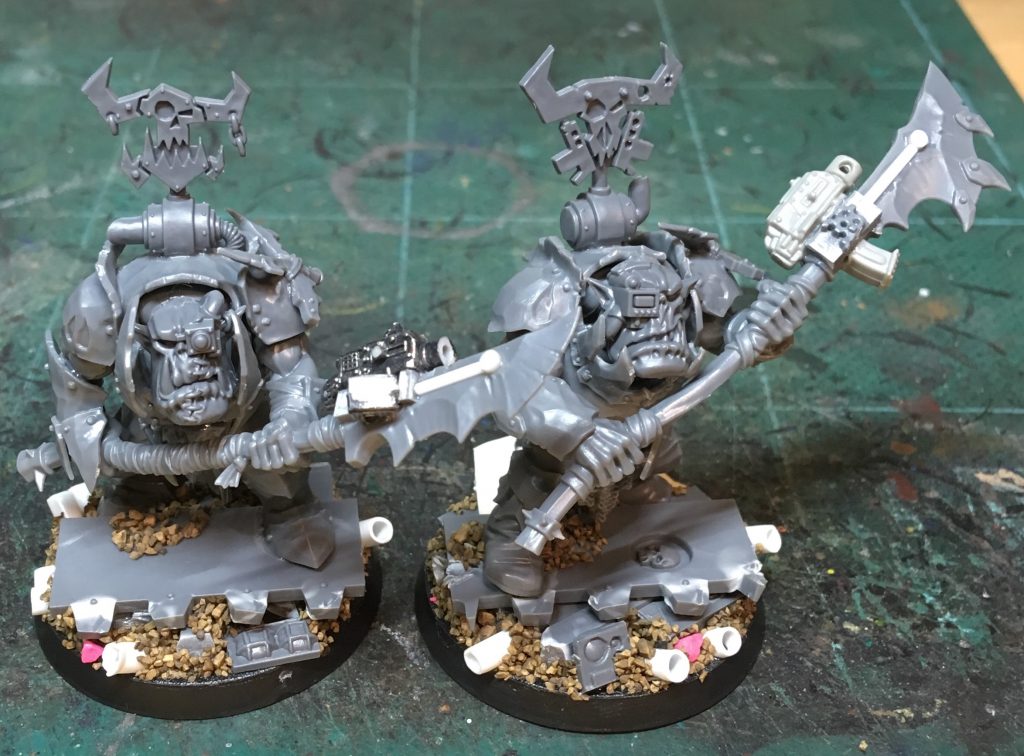 Through all my years involved in this hobby, there’s one Warhammer 40k faction that I’ve never painted: my very first adversaries, from back in the Rogue Trader / 2E days.

That’s about to change for my Arc40k 2019 project, hopefully getting the band back together to work on a joint project with some friends. It’s time for Arcanacon to start looking a little green…

More details to come soon – I’ve just ordered the models I’ll need, and will start up a project diary once they arrive.

This is a quick look at what’s on my desk at the moment. I decided to try out some new techniques on the allied Alaitoc detachment I’m painting for this year’s Arc40k tournament next month, as I’ve always liked the mottled blue armour from the studio colour scheme. 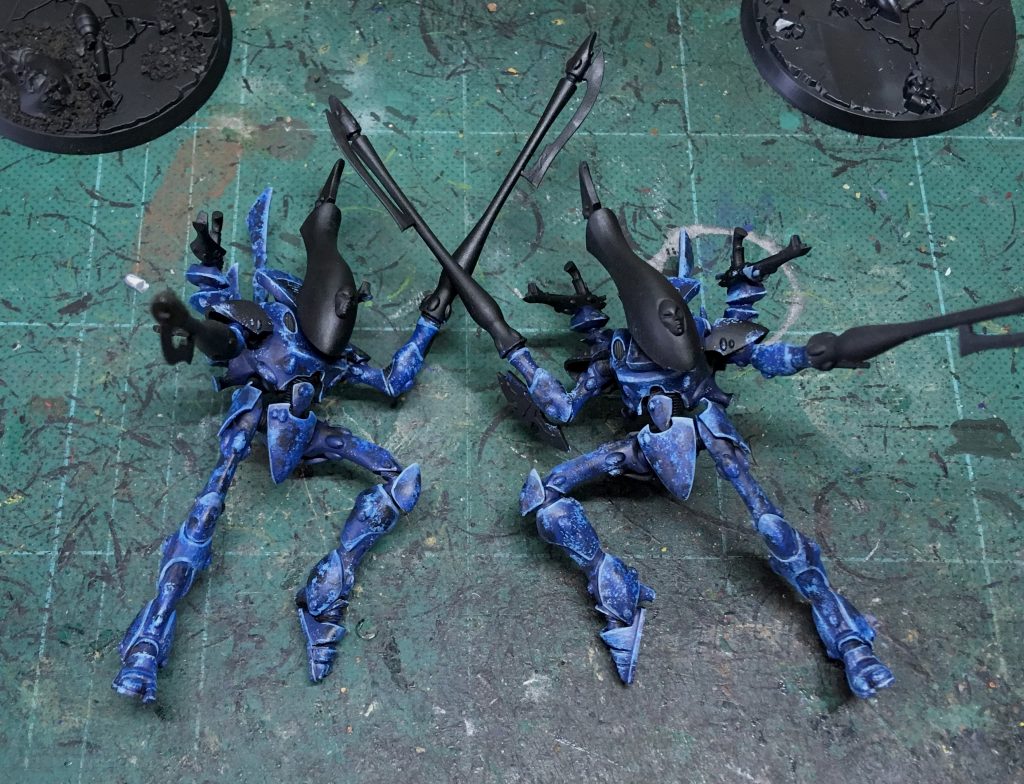 I’ve used a few different P3 paints for these: basecoat is Exile Blue over a black undercoat. I’ve used a bit of sponge to stipple on Cygnar Blue Base, and some Underbelly Blue (mixed with a bit of Cygnar base) to get the mottled patterning.

I picked out the edges of the armour with the same Underbelly mix, and also used it as a glaze to highlight the upper surfaces of curved armour areas. Once that was done, I glazed the whole surface with some Cygnar base to bring some more of a rich blue hue back to it.

My local store ran a painting contest after 8th Edition 40k launched, for the figure that came with that month’s White Dwarf magazine. It had been a while since I painted anything in power armour, so I gave it a shot – this is my version of a Primaris Intercessor, from the Dark Angels chapter. 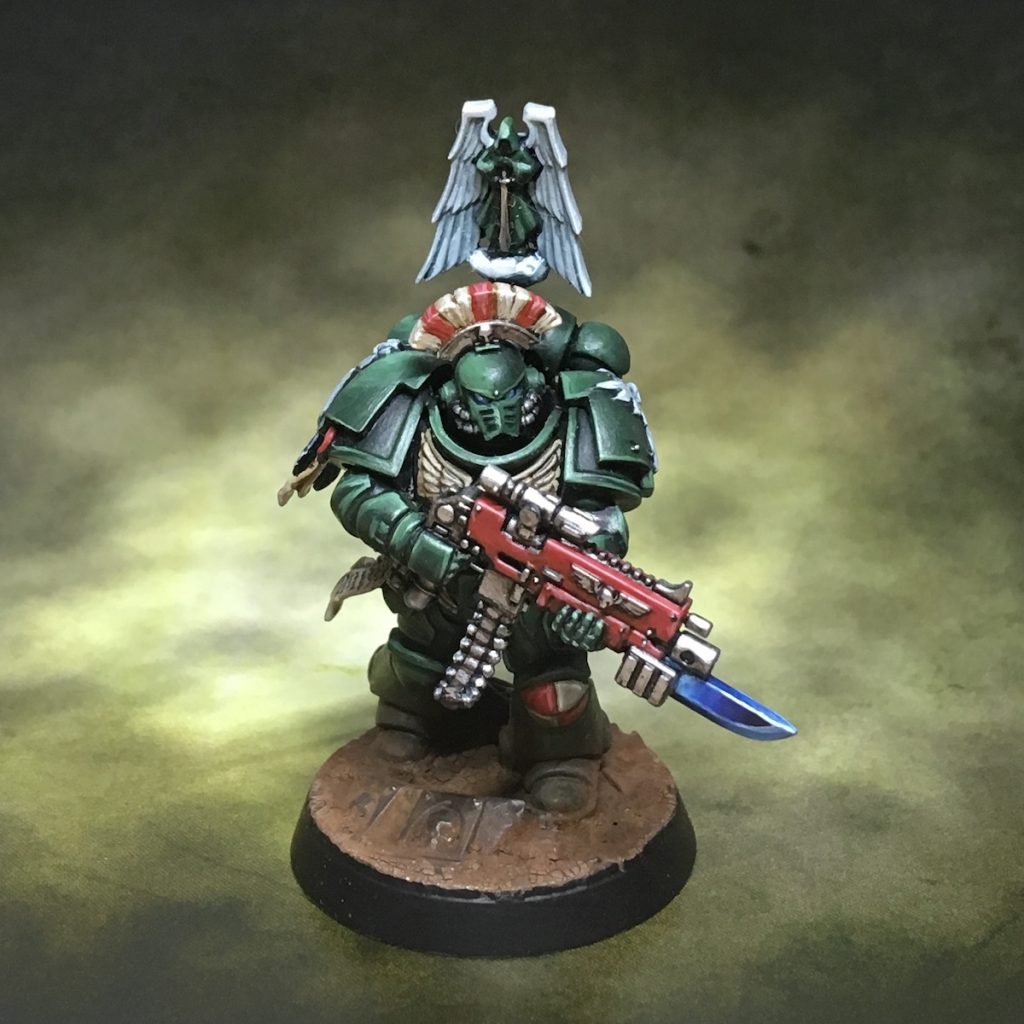