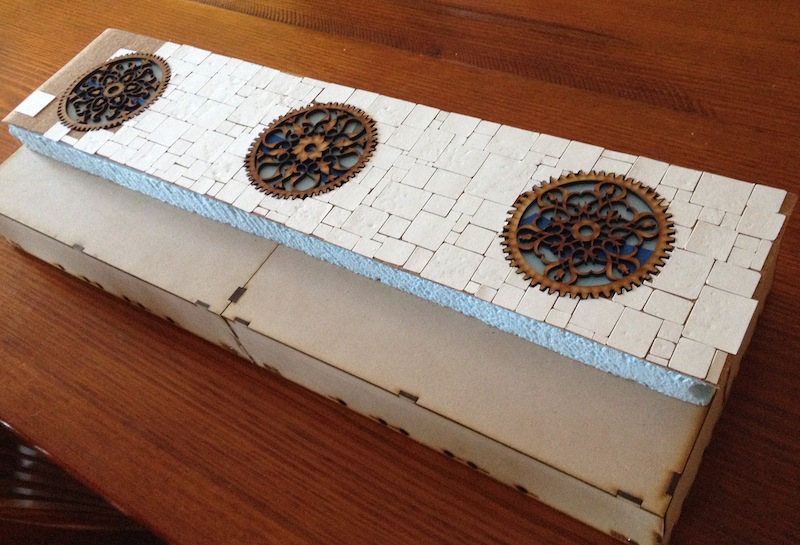 I’ve decided to cut out flagstones for the upper and lower ground levels by hand, inspired by Psycosm’s awesome Malifaux table on WargamerAU, and Pete the Butcher’s city board on the Privateer Press forums.

I’ve tried a few test pieces of road using the blue foam, and while it holds a cobblestone texture very well it’s just a bit too soft for a horizontal playing surface that will have metal figures on it. I learned my lesson a few years ago when I made a shallow water terrain piece using the one-part Woodland Scenics polyurethane water – it stayed slightly soft, and after a metal Leviathan was parked on it during a game the swamp retained a base imprint for almost two years… I’ll use the textured foam surface for walls, stairs etc, but will go for something more hard wearing for the surfaces that have models sitting on them.

When I get a chance to go through my old No Quarter magazines, I vaguely remember seeing this technique used on one of their terrain pieces. After the flagstones are glued down, you can paint a thin layer of PVA on top to seal them – and then sand the whole lot back a bit once the glue has dried. That smooths them out a bit, and removes incongruous-looking point edges on what should look like a well-worn road. 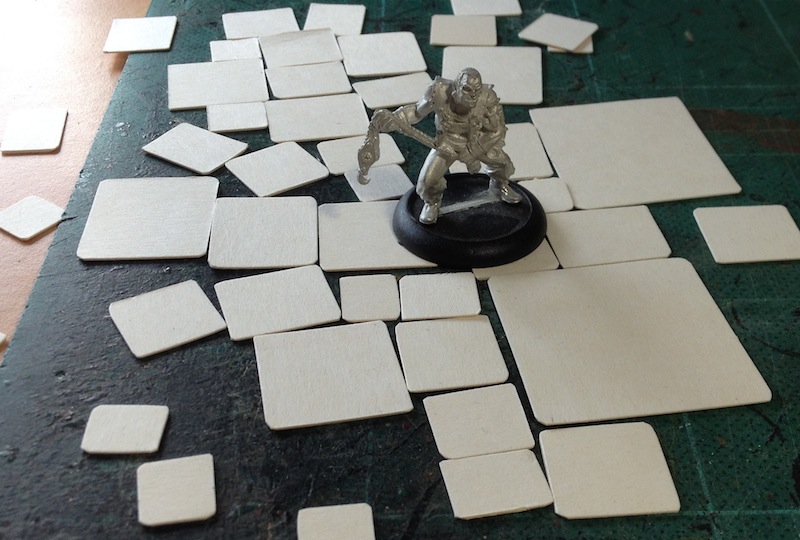 I also found four of these stashed away in my box of random modelling gear, bought on a whim in an earlier order from Back 2 Base-ix… I think they’ll work well for breaking up the street paving a bit, and adding some more detail. It’s all too easy to end up with large slabs of bland repetition that prevent you from seeing the scale of a large terrain piece.

At 3mm (cut from MDF) they’re a bit too thick to just sit on top of things. I picked up a roll of thin (2.4mm) cork sheet from Riot, and it looks pretty much perfect for raising the road up to match the ornamental gears. The picture above shows some holes roughly cut through the cork, testing out the idea. I’m planning to add some fine gravel or model railway ballast to fill the internal detail up to road level.

Now it’s starting to look more like a piece of terrain, and less like a collection of random components 🙂 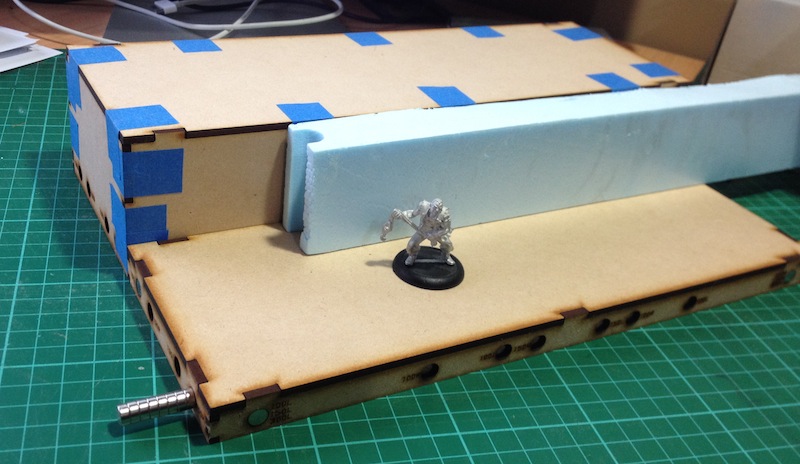 The Day of Parcels, long prophesied, has finally come to pass. Today’s mail included the Warmachine: Tactics Kickstarter character models, a package of Epic Eldar, and my Battleframe 5000 boards from Back 2 Base-ix 🙂 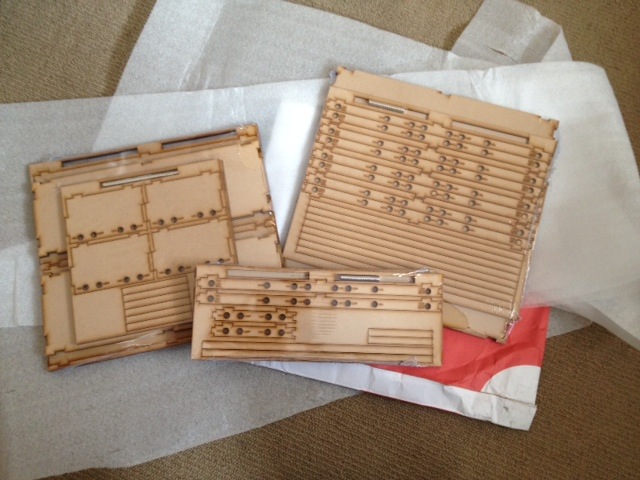 These things are pretty awesome. Here’s what they look like assembled… 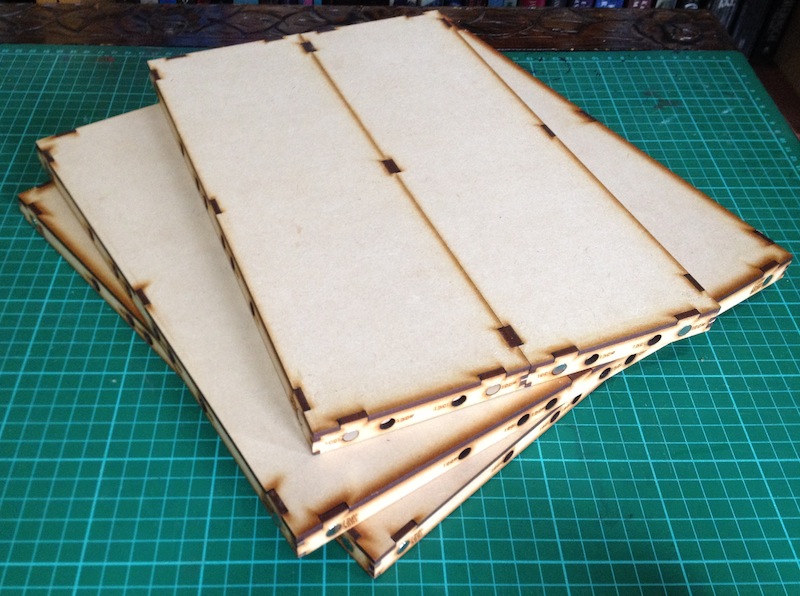 The 300×300 boards don’t fit together quite as well as the 300×100 version – I’m not sure whether it’s just because they were the first ones I assembled, or if the pieces are very slightly out. It’s just a matter of trimming a tiny bit of timber off some of the vertical slats, though, so there’s no major problem there. The newer 300×100 ones are extremely precise, and fit together perfectly in all orientations.

Magnets were very easy to add, though I’ve been paranoid about getting the orientation wrong! Most of my boards will be glued together in two larger panels, but I’m keeping magnets on the edge so that I can attach more terrain in future, or use picture frame moulding to make a bevelled edge for the demo board.

I have four more 300×100 boards (63mm height) to assemble, and then I’ll put some figures on the board to test out gameplay considerations – particularly looking at movement and control areas, starting with models right at the edge of the board. If 2×2 looks too small, I can add another 100mm of width with two more rectangular sections.

In theory, 2′ x 2′ is an ideal size for a demo game: there’s a single turn of manoeuvre, and then combat starts immediately. If the first player runs forward, the second player might even get some shots off in turn 1. Melee combat usually starts on turn 2/3 – a huge improvement on spending multiple turns watching people moving about and avoiding combat…

For Warmachine or Hordes demo games I’ll only bother measuring a model’s Control area when they use their feat – after one move, almost the entire area is in range for focus/fury allocation. Fewer rules up front = faster demos, letting people get to the fun stuff straight away (i.e. slamming and throwing giant robots off the dock and into the water).